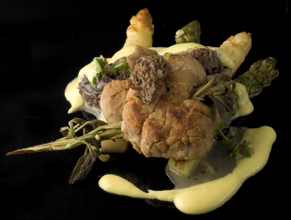 Jean-Louis began his culinary career at 14 and earned his formal training at l’Ecole Hotelière Jean Drouant in Paris, where he met his wife, Karen.

By the time he was 26 years old, he and Karen ran “Restaurant Jean-Louis Dumonet” in Chateauroux, France. The restaurant was touted in all the guide books. Their heart of adventure set them on the path to New York City.

They opened Trois Jean which received praise from the likes of The New York Times “Breathtakingly good” (The New York Times), and Zagat “extraordinary”. The restaurant was sold in 2000 and Jean-Louis went on to work at some of NYC’s most prestigious kitchens.

As of January 1st, 2008, Jean-Louis has been the Executive chef of the prestigious Union Club.

Jean-Louis is a member of the James Beard Foundation and has cooked at the James Beard House. In 1994 he was awarded the prestigious title of Maître Cuisinier de France. In 2010 he has been awarded by the French Minister of Agriculture l’Ordre du Merite Agricole, (National Order of Agricultural Merit). Its ribbon is Moiré pattern green with a red-orange stripe down each side – the stripes symbolize the prestigious institution of the ordre national de la Légion d’honneur.

1. blanch the sweetbread (start in cold water, then take them out when the water is boiling)
2. cool off over cold water and peel them, divide them in 4 equal portions, press them to extract the water, and keep refrigerate for 4-6 hours
3. prick them with the rosemary sprig
4. salt and fresh ground pepper the sweet bread, and flour it very lightly
5. in a non stick pan, sauteer the sweetbread in olive oil and little butter, until golden brown, then finish it in a 350F oven for 8 to 12 minutes (depending of thickness)

6. peel the white asparagus up to the head (make sure the skin is all gone or it will be very hard to eat
7. peel the green half way
8. cook them separately in a steamer or in boiling salted water into bunches (the green are cooked faster than the white)

1. cut the morels in two or four to have the same size and to easy the cleaning
2. clean the morels in cold water until there is no more dirt
3. pat dry them on paper towels
4. in a hot sauté pan, add the butter and the morels
5. salt, and mix.
6. let the water evaporate, add the Noilly Prat
7. reduce a bit, add the chicken stock
8. reduce again.
9. rectify the seasoning ( salt, cayenne pepper)

On the plates, place the sweetbread, then alternate the green and white asparagus, sprinkles a lemon juice on them.
Add the morels sauce on them, and surround with the hollandaise sauce.
Bon appetit.