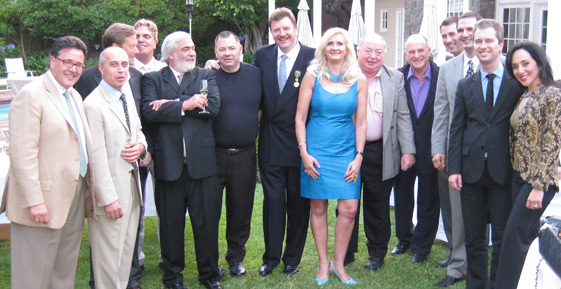 I have had the pleasure of meeting French chef Bruno Lopez many times throughout his career.

I’ve tasted his dishes when he was working at different The Ritz-Carlton hotels, at the Regent Beverly Wilshire (now a Four Seasons), and the Hotel Bel-Air.

I was most impressed with his peach gazpacho with truffle oil, which he made when he was at the restaurant of the Raffles L’Ermitage hotel (now part of the Viceroy Hotel Group). I was sorry when he stopped serving the public when he became a private chef at the French Consulate Residence in 2009.

Last Friday, I got to congratulate him on his skills yet again, but the setting was quite different.

Lopez received the esnigns from French Consul General David Martinon making him an officer of the Ordre National du Mérite Agricole, in recognition for his work in promoting French cuisine in the USA.